At Mehfil on the 14th of April 2015, we brought into focus the life and works of renowned poet Nazeer Akbarabadi.

We had the pleasure and honour of an esteemed panel, which included Kuldeep Singhji who has composed many of Nazeer’s poems into beautiful melodies. His group consisted of Michel, Ambar, Surendraji and Indrajeetji. We also had with us Lubna Salim, Iqbal Niyazi along with Ayat who read some poems and gave us some anecdotes. Javed Siddiqui Saab gave the audience an overall view of Nazeer Akbarabadi.

We commenced with an introduction followed by the Nazeer Saab’s ‘Ganeshvandana’ read by Lubna. Then Javed Saab introduced the audience to the Nazeer giving interesting incidents and anecdotes about his life. He mentioned that Nazeer is perhaps the only poet in Indian history who has written a poem for every mood and event in human existence. His oeuvre consists of 700 poems, ranging from vegetables to Lepers.

Lubna Salim read an riveting extract from a play called “ Agra Bazar” which was written and directed by Habib Tanvir. This play is very fascinatingly scripted, Tanvir creates an environment where you never really see Nazeer Akbarabadi but people in the play narrate his poems seamlessly in a bazar entwining Nazeer’s work in a story format.

This recitation was followed by a beautiful poem titled “ Banjaranama” which was shown to the audience as a video clip.

Following that Kuldeep singhji and his team sang many of Nazeer’s Nazm’s including ‘Rotiyaan’, ‘Mazamat Ahlay Duniya’ and many other which kept the audience spellbound. This was interspersed with Iqbalji and Ayat reciting some poems.

1. Agra Bazar – It is play, available in Hindi and comprises of some of Nazeer Akbarabadi’s finest works.

2.  A complete volume of his works has been printed : details below 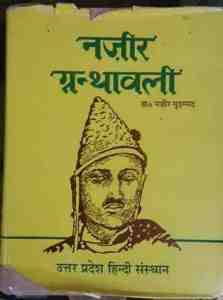 3. We will be posting many of the poems recited during the mehfil in due course of time. Stay tuned to the Urduwallahs blog for more.