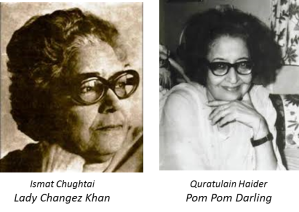 Did You Know –
Ismat Chughtai and Quratulain Haider (Annie Apa), both contemporaries and prolific Urdu short story writers, had given each other the nicknames of Lady Changez Khan and Pom Pom Darling respectively, out of mutual respect.

As our friends from the Karachi based group Zambeel Dramatic Readings explain on their website:
These curious designations refer to the titles Ismat Chughtai and Quratulain Hyder attributed to each other in the course of their literary careers. Ismat Chughtai is well known for her bold stories that challenged traditional morality and the notions of a woman’s place in society. In a scathing text titled “Pom Pom Darling” Ismat was critical of Quratulain’s writing and her world of anglised characters called Shosho and Fofo, who “swam and danced and played” and belonged to a world of “charming people all cast in the same mould”. Quratulain Hyder shows her deep respect for Ismat is an essay titled “Lady Changez Khan” which she wrote after the latter’s demise.