People crawled in slowly as we set the stage for our 8th mehfil@prithvi. Our discussion was going to take us back to a pre independence period when the Progressive Writers’ Movement started. Our aim was to understand this fascinating movement, which embodied almost every artist of its time.

Many people graced the occasion and we were happy to see some regular faces that have become an inherent part of the mehfils. Our team consisted on Shama Zaidi Apa, Javed Siddiqui Saab, Salim Arif, Lubna Salim, Suhail Warsi and Atul Tiwari Saab.

The evening started with Atul Tiwari Saab demystifying the movement. He explained that the Progressive Writers’ Movement in Urdu literature was a progressive literary movement in the pre partition British India consisting of writers who were anti imperialistic and left oriented. He went on to reading the Manifesto, which was an informative, enriching and enlightening experience for the audience.

After Atul Saab set the mood for the evening the baton was passed on to Suhail Warsi. Our fellow urduwallah read a paper on the poet’s ideology at the onset of the Writers’ movement. He explained that poetry, which was earlier written about pinning love, romance and lovers took an interesting twist from this period onwards. With an example of Faiz he said that the poem “ Mujhse pehli si mohabat na maang” (Don’t ask me now, Beloved, for that love of other days). Faiz’ s context was not about love, but he uses metaphors to describe changing times and thoughts. In this line he subtlety explains “Aur bhi dukh hain zamane mein mohabbat ke siwa, Rahatein aur bhi hain wasl ki raahat ke siwa” (Other pains exist than those that love brings, Other joys than those of lover’s mingling.). Suhail mentioned the works of great poets like Josh Malihabadi, Majaz, Makhdoom and Sahir. A song clip “Woh Subah Kabhi Toh Aayegi” was played to compliment the beautiful rendition done by Suhail.

We continued the session with Shama Apa, who read an amazing excerpt from the book ‘Angarey’. She explained that ‘Angarey’, which had stories by writers like Sajjad Zaheer, Ahmed Ali, Rashid Jahan and Mahmud-uz-Zafar was published in 1932 and was immediately banned in India by the British Government in 1933, “for hurting the religious susceptibilities of a section of the community.” This gave rise to the All-India Progressive Writers’ Movement & Association of which both Sajjad Zaheer and Ahmed Ali were co-founders. The first official conference of the Association was held in Lucknow in 1936, which was presided over by Munshi Premchand. Unfortunately, the book is out of print. 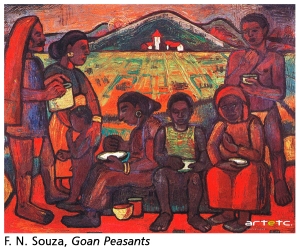 While people sipped tea in the interval, paintings of Chittaprasad, Zainul Abedin, FN Souza and Somanth Hore were showcased. All of who were progressives.

We commenced the second half with Lubna Salim who eloquently read an excerpt from the story “ Do Haath” by Ismat Chughtai. Shama Apa explained that Ismat was strongly influenced by Rashid Jahan. Incidentally Naseerudin Shah has transformed this particular Ismat story into a play.

The conversation seeped from prose into Drama and Films. Javed Siddiqui Saab and Salim Arif explained the IPTA (Indian Peoples Theatre Association) movement. The transition from Theatre to cinema seemed seamless. Names like Premchand, PC Joshi, Bimal Roy were discussed and we ended the session with a clip from the film “ Do Biga Zameen”

This session was potent and yet we had only touched the surface. We promised to return next month with more interesting stories on this movement so that we could get a better insight into the stories of that time.

2 thoughts on “Peek-a-boo! The Progressive Writers’ Movement Part I”